The Many Faces of Chromatography 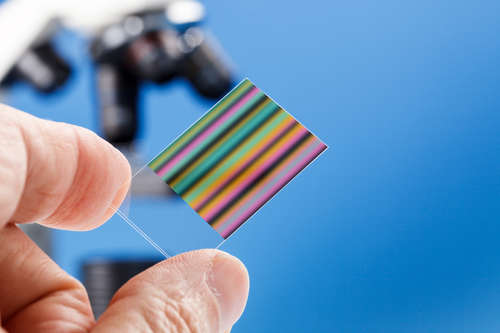 Let’s try an easy experiment that will dramatically show you how chromatography works. It won’t take long or require any specialized materials; probably you have these things around your house.

First, get a clean sheet of absorbent paper. Then put separate spots of various colors near one edge of the paper. You could use water-soluble felt-tipped pens or food coloring. Now, roll the paper into a tube and place it into the glass with a little water in the bottom. Make sure that the colored spots are at least partly in the water.

The water will be drawn up by capillary action, making the colors run. When you look carefully at the original spots, you’ll observe that the colors have separated into the primary colors of red, blue and yellow, which, when combined, make all other colors. This simple experiment will introduce you to paper chromatography.

What is Chromatography?
What actually is chromatography? Well, the two parts of the word define it quite well. “Chromo(a)-“ indicates color or pigment. “-graphy” means writing about or representing a subject such as art or science.

Chromatography has been around for longer than a century. A Russian botanist, Mikhail Tswett, developed the process just after the turn of the 20th century to study plant pigments such as chlorophyll.

So, what else can chromatography be used for? Later in that century, chromatography was used to separate and study complex mixtures. Today, we use it for a variety of important scientific applications. Let’s take a look at some of them.

What is Chromatography used for?
Many branches of science use chromatography to improve our quality of life. Whatever scientific career you choose, you may encounter the use of chromatography. Two chromatographers were awarded Nobel prizes! Let’s take a look at some examples of scientific uses for this versatile tool that can be used for very small samples.

In short, the use of chromatography is so much a part of our world that you may even see it used in movies as well as the CSI TV series already mentioned. In “My Cousin Vinny,” gas chromatography results were cited in a courtroom scene. This use reflected an actual application that’s still in use today. However, some movies take literary license and reference things that are not scientifically accurate.

Such is the case with Sean Connery, acting as Dr. Robert Campbell, who roamed the wild Amazon jungle in search for a cure for cancer in “Medicine Man.” Supposedly, he used a portable backpack gas chromatograph (neat idea, but not invented yet, nor does it seem practical). Only in the movies! Remember, dramatic presentations rely on our ability to suspend our disbelief to enjoy being immersed in the experience, so don’t look too closely.

How does Chromatography work?
No matter the type of chromatography we’re considering, all depend on components moving through a substance, which can be called differential migration. At the conclusion of the process, we measure the differences in the distances and rates that substances move. The process involves two stages: the mobile stage and the stationary stage. The results come from measuring the point at which different compounds stop moving. At that point, they have separated from other compounds. Here is a brief introduction to the main types of chromatography.

What types of chromatography are there?

How are results measured?
We measure how far a compound travels by measuring the distance the solute moves and dividing it by the total distance the solvent moves. The resulting retention factor (Rf) is what we compare the values of a known compounds, showing whether they are similar or identical.

So, whether you’re looking for a science project or a career, you might consider how chromatography could help.